THE WIZARD OF OZ 4K Ultra HD Blu-ray Dated and Pre-Orders Up!

Victor Fleming's classic 1939 musical starring Judy Garland is now up for pre-order in 4K at Amazon.

Adapted from L. Frank Baum's timeless children's tale about a Kansas girl's journey over the rainbow, The Wizard of Oz opened at Grauman's Chinese Theater on August 15, 1939. The film was directed by Victor Fleming (who that same year directed Gone With the Wind), produced by Mervyn LeRoy, and scored by Herbert Stothart, with music and lyrics by Harold Arlen and E.Y. Harburg. Dorothy was portrayed by a 4'11" sixteen-year-old girl who quickly earned her reputation as the world's greatest entertainer: the incomparable Judy Garland. Ray Bolger appeared as the Scarecrow, Bert Lahr as the Cowardly Lion, Jack Haley as the Tin Man, and Frank Morgan in six different roles, chief among them the Wizard himself.

The Wizard of Oz received five Academy Award® nominations, including Best Picture (Outstanding Production), and captured two Oscars®—Best Song (“Over the Rainbow”) and Best Original Score -- plus a special award for Outstanding Juvenile Performance by Judy Garland. The film was an overwhelmingly popular and critical success upon its initial release and repeated its ability to captivate audiences when M-G-M reissued the film in 1949 and 1955. The film made a new kind of history with its network television premiere in 1956 on CBS. Nearly 45 million people tuned in for this initial telecast, marking the beginning of an annual tradition. Ever since, The Wizard of Oz has been shown virtually annually on network (and then cable) television; its magical story and heartfelt performances have enabled it to grow from a perennial classic to its current status as a treasured icon of popular culture.

Using state of the art technology, a new 8K 16bit scan of the original Technicolor camera negative became the basis for the 4K UHD scan.  The process was overseen by MPI colorist Janet Wilson, who has overseen every remaster of The Wizard of Oz for the past 20 years.

•    The Making of The Wonderful Wizard of Oz

•    The Wonderful Wizard of Oz Storybook (narrated by Angela Lansbury)

You can find the latest specs for The Wizard of Oz linked from our 4K Release Schedule, where it is indexed under October 29. 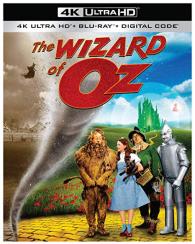