The acclaimed fantasy film from Guillermo Del Toro is coming to 4K UHD this October.

As previously reported, Warner/New Line Cinema is preparing Pan's Labyrinth for 4K Ultra HD Blu-ray sometime later this year, and now it looks like it will be available on October 1.

In the aftermath of the Spanish Civil War, Ofelia and her ailing mother arrive at the post of her mother’s new husband, a sadistic army officer, in the Spanish countryside. As Ofelia’s mother lies immobilized in anticipation of her forthcoming child, and her high-ranking stepfather attempts to fulfill his orders of crushing a nearby guerrilla uprising, the young girl ventures into an elaborate stone labyrinth presided over by the mythical faun Pan. Convinced by Pan that she is a legendary lost princess, Ofelia sets off on a quest to complete three dangerous tasks and reclaim her kingdom and immortality.

You can find the latest specs for Pan's Labyrinth - 4K Ultra HD Blu-ray linked from our 4K Blu-ray Release Schedule, where it is indexed under October 1. 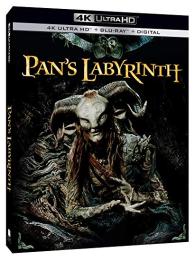