Another DC Universe animated feature will be available on home video in August.

In an early announcement to retailers, Warner Brothers says Batman: Hush will hit 4K Ultra HD Blu-ray and Blu-ray on August 13 and on digital on July 20.

An adaptation of the seminal DC classic tale, Batman: Hush centers on a shadowy new villain known only as Hush, who uses Gotham’s Rogues Gallery to destroy Batman’s crime-fighting career, as well as Bruce Wayne’s personal life – which has already been complicated by a relationship with Selina Kyle, aka Catwoman.

Batman: Love in Time of War (Featurette)– Dangerous. Seductive. Villain. Hero. This is the story of Selina Kyle and the relationship she has forged with the world’s greatest detective.

From the DC Vault –The Batman/Superman Hour: “The Underworld Underground Caper””

From the DC Vault – The Batman/Superman Hour: “Partners in Peril”

You can find the latest specs for Batman: Hush linked from our 4K and Blu-ray Release Schedules, where it is indexed under August 13. 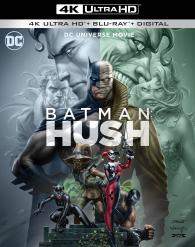 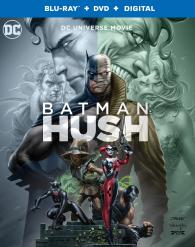