Warner Brothers says Pokémon: Detective Pikachu will be available on 4K Ultra HD Blu-ray and Blu-ray on August 6. A 3D release will be exclusive to Best Buy.

The first-ever live-action Pokémon adventure, Pokémon: Detective Pikachu stars Ryan Reynolds (the "Deadpool" films, "Buried," "Life") as Detective Pikachu and is based on the beloved Pokémon brand—one of the world's most popular, multi-generation entertainment properties and most successful media franchises of all time. With Detective Mode on Blu-ray, watch Pokémon: Detective Pikachu like you've never seen it before and discover a world of hidden clues, behind-the-scenes footage, pop-up trivia, Pokémon facts, fun featurettes, Easter eggs and more!

The 4K release will feature an HDR video presentation with a Dolby Atmos soundtrack and supplements on both releases include:

Creating the World of Detective Pikachu

Ryan Reynolds – Outside the Actor's Studio

"Carry On" by Rita Ora and Kygo (Music Video)

You can find the latest specs for Pokémon: Detective Pikachu linked from our 4K and Blu-ray Release Schedules, where it is indexed under August 6. 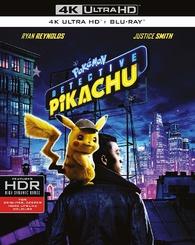