The third season of the A&E crime series will hit Blu-ray in March. You can pre-order the show now.

In an early announcement to retailers, Warner Bros. is preparing 'Longmire: The Complete Third Season' for Blu-ray on March 3.

Wyoming Sheriff Walt Longmire is back in the saddle for a third thrilling season. After winning his heated re-election as Absaroka County sheriff vs. his ambitious deputy Branch Connally, Walt Longmire faces a stampede of problems both personal and professional. With Branch mysteriously shot on "the Rez" by the White Warrior spirit of a dead man and Henry arrested in connection to the murder of Walt’s wife’s killer, Longmire finds himself butting heads with tribal police, big money connections and longstanding feuds. Add to this his daughter Cady’s pursuit of the truth regarding her mother’s killer, his deputy Vic Moretti’s already strained marriage now under pressure with another unwelcome return from her Philadelphia past, and the inevitable rural undercurrent of murder, secrets and betrayal and get ready for Big Sky drama at its best. Last season, Walt and his deputies each braved a storm and did it nobly. But for every storm, there is an aftermath.

The Blu-ray will feature 1080p video, a DTS-HD MA 5.1 soundtrack, and supplements will include The Ghost in the Storm featurette.

You can find the latest specs for 'Longmire: The Complete Third Season' linked from our Blu-ray Release Schedule, where it's indexed under March 3. 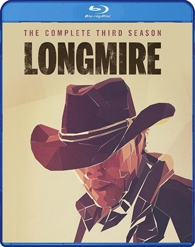 Discs mentioned in this article: (Click for specs and reviews)
Longmire: The Complete Third Season (Blu-ray)