The cult comedy starring Rick Moranis and Dave Thomas is heading to Blu-ray in March.

In an early announcement to retailers, Warner Bros. is preparing 'Strange Brew' for Blu-ray on March 1.

Take off you hosers… to the Great White North! What matters most in life: Hockey, donuts, back bacon and beer! Especially beer. Brothers Bob and Doug McKenzie of the Canadian Great White North keep the suds flowing as they upend the diabolical mind-controlling scheme of Brewmeister Smith. Beauty, eh?

Specs have not been detailed yet, but supplements will include: The Animated Adventures of Bob and Doug McKenzie; Classic McKenzie Brothers Sketch from SCTV: How to Stuff a Mouse in a Beer Bottle; and Theatrical Trailer.

You can find the latest specs for 'Strange Brew' linked from our Blu-ray Release Schedule, where it's indexed under March 1. 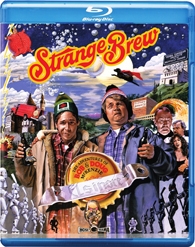 Discs mentioned in this article: (Click for specs and reviews)
Strange Brew (Blu-ray)