The critically acclaimed classic will celebrate its 75th anniversary on Blu-ray in November.

In an early announcement to retailers, Warner Bros. is preparing 'Citizen Kane: 75th Anniversary' for Blu-ray on November 15. In addition to the Blu-ray release, the American Film Institute (AFI) will mount a special screening of the restored master on November 13. The screening will take place at the Egyptian Theatre in Hollywood at 1:30 p.m., followed by an AFI Master Class, featuring close personal Welles friend Peter Bogdanovich and a celebrity and academic panel to be announced.

Orson Welles' masterwork (#1 in the American Film Institute's list of Best American Movies) dazzles anew in a superb digital transfer. It's grand entertainment, sharply acted (starting many of Welles' Mercury Players on the road to thriving film careers) and directed with inspired visual flair. Chronicling the stormy life of an influential publishing tycoon, this Best Original Screenplay Academy Award winner (1941) is rooted in themes of power, corruption, vanity - the American Dream lost in the mystery of a dying man's last word: "Rosebud."

The Blu-ray will feature 1080p video, a DTS-HD MA 1.0 soundtrack, and supplements will include:

You can find the latest specs for 'Citizen Kane: 75th Anniversary' linked from our Blu-ray Release Schedule, where it's indexed under November 15. 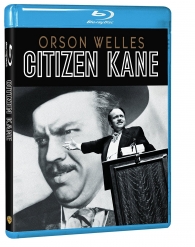