The sixth season of the Showtime series will hit Blu-ray in August.

In an early announcement to retailers, Warner Bros. is preparing 'Shameless: The Complete Sixth Season' for Blu-ray on August 30.

Scrappy, stubborn and strong, the Gallaghers are tested by changing times, but Season Six finds them older, wiser… and better at playing the system. The new season picks up a few months after last year’s finale, as the Gallaghers prepare for yet another long Chicago winter. Frank is still mourning the loss of Bianca, while his newfound appreciation for life is freaking the Gallaghers out. This season sees more than just the arctic Lake Michigan winds whipping through the Southside. Carl’s out of juvie. While Fiona struggles with a still-unstable Ian to take his meds, she’s also got another situation looming as Debbie faces a brand new baby-mama-drama. Change is hard and the Gallaghers are as surprised as anyone at how life is turning out for them. But the question remains – as they come into their own and find out who they really are – is it really possible that the Gallaghers could grow apart for good?

Specs have not been detailed yet, but supplements will include: Running The Table: A Shameless Conversation (Featurette); Shamelessly Shanola (Featurette);and Deleted Scenes.

You can find the latest specs for 'Shameless: The Complete Sixth Season' linked from our Blu-ray Release Schedule, where it's indexed under August 30. 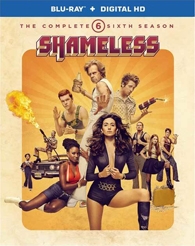 Discs mentioned in this article: (Click for specs and reviews)
Shameless: The Complete Sixth Season (Blu-ray)