Dolly Parton's inspiring story will be told on Blu-ray in November.

In an early announcement to retailers, Warner Bros. is preparing 'Dolly Parton's Coat of Many Colors' for Blu-ray on November 29.

Discover the magic and warmth of Dolly Parton's Coat of Many Colors, based on the inspiring story of living legend Dolly Parton's remarkable upbringing in rural Tennessee. Set in 1955, this special follows the Parton family as they struggle to overcome tragedy and discover the healing power of love and faith.

You can find the latest specs for 'Dolly Parton's Coat of Many Colors' linked from our Blu-ray Release Schedule, where it's indexed under November 29. 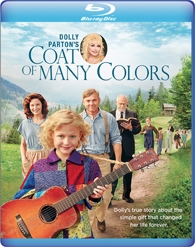 Discs mentioned in this article: (Click for specs and reviews)
Dolly Parton's Coat of Many Colors (Blu-ray)