Prepare for another trip to Wally World on Blu-ray in November. You can pre-order the disc here.

As previously reported, Warner Bros. is preparing 'Vacation (2015)' for Blu-ray, and the release date is now set for November 3.

The next generation of Griswolds is at is again – and on the road for another ill-fated adventure. Following in his father's footsteps and hoping for some much-needed family bonding, a grown-up Rusty Griswold (Ed Helms) surprises his wife, Debbie (Christina Applegate), and their two sons with a cross-country trip back to America's "favorite family fun park," Walley World.

The Blu-ray will feature 1080p video, a DTS-HD MA 5.1 soundtrack, and supplements will include: Return to Walley World; The Griswold Odyssey; Gag Reel; Deleted Scenes; and Georgia.

Suggested list price for the Blu-ray/DVD/Digitla HD combo pack is $44.95.

You can find the latest specs for 'Vacation (2015)' linked from our Blu-ray Release Schedule, where it's indexed under November 3. 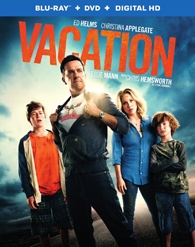 Discs mentioned in this article: (Click for specs and reviews)
Vacation (2015) (Blu-ray)