The Wachowskis' 'Jupiter Ascending' Blu-ray & Blu-ray 3D Are up for Pre-Order!

The sci-fi action flick starring Channing Tatum, Mila Kunis and Eddie Redmayne is heading to Blu-ray in May, and you can pre-order the movie here.

Jupiter Jones was born under a night sky, with signs predicting that she was destined for great things. Now grown, Jupiter dreams of the stars but wakes up to the cold reality of a job cleaning other people's houses and an endless run of bad breaks. Only when Caine Wise, a genetically engineered ex-military hunter, arrives on Earth to track her down does Jupiter begin to glimpse the fate that has been waiting for her all along - her genetic signature marks her as next in line for an extraordinary inheritance that could alter the balance of the cosmos.

Tentative suggested list prices for the Blu-ray and Blu-ray 3D are $44.95

You can find the latest specs for 'Jupiter Ascending' linked from our Blu-ray Release Schedule, where it's indexed under May 19. 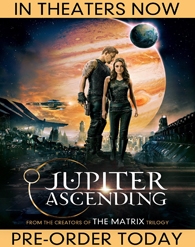