'The Last Ship: The Complete First Season' Bound for Blu-ray in June

The first season of the TNT series is setting a course for Blu-ray in June, and pre-orders are now live.

In an early announcement to retailers, Warner Bros. is preparing 'The Last Ship: The Complete First Season' for Blu-ray on June 9.

Navy Captain Tom Chandler (Eric Dane) and his crew must find a cure after a pandemic wipes out billions of people worldwide. Scientist Rachel Scott is assigned to the U.S.S. Nathan James to investigate the cause of the rapidly spreading virus. Chandler and his crew may be humanity’s last hope in the wake of a worldwide catastrophe.

Specs have not been detailed yet, but supplements will include: Comic Con Panel Interview; Behind the Episodes; The Making of Last Ship; Character Pieces; Prequels; and Cast Interviews.

You can find the latest specs for 'The Last Ship: The Complete First Season' linked from our Blu-ray Release Schedule, where it's indexed under June 9. 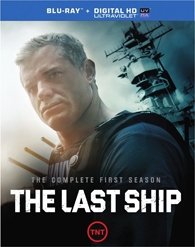 Discs mentioned in this article: (Click for specs and reviews)
The Last Ship: The Complete First Season (Blu-ray)