'The Frank Sinatra Collection' Blu-ray Dated for May

Five classic films starring the legendary performer are coming to Blu-ray in May. You can pre-order the movies here.

In an early announcement to retailers, Warner Bros. is preparing 'The Frank Sinatra Collection' for Blu-ray on May 5. The five-film collection will include the previously available 'Guys and Dolls' and 'Ocean's 11,' as well as the Blu-ray debuts of 'Anchors Aweigh,' 'On the Town,' and  'Robin and the 7 Hoods.' The latter three will also be released in separate Blu-ray editions.

'Anchors Aweigh' - Oscar-winners Gene Kelly and Frank Sinatra star as two sailors on leave in Hollywood who sneak into a movie studio so they can win an audition for aspiring singer Kathryn Grayson.

Specs have not been detailed yet, but supplements will include: Hanna & Barbera on the Making of "The Worry Song" (from MGM: When the Lion Roars); Football Thrills of 1944 (MGM Short, 1945); Jerky Turkey (MGM Short, 1945); and Trailer.

'On the Town' - Gene Kelly and Frank Sinatra star in this fun-filled spectacular musical about three sailors who wreak havoc as they search for love during a whirlwind 24-hour leave in New York City.

Specs have not been detailed yet, but supplements will include: Mr. Whitney Had a Notion (MGM Short, 1949); Doggone Tired (MGM Cartoon, 1949); and Trailer.

'Guys and Dolls' - When Sky Masterson is challenged to take a missionary to Havana, he finds himself falling in love. But will she return his love when she realizes the trip was a ploy?

The Blu-ray will feature 1080p video, a DTS-HD MA 5.1 soundtrack, and supplements will include: The Goldwyn Touch; From Stage to Screen; More Guys and Dolls Stories; Musical Performances; and Trailer.

'Ocean's 11' - The famous "Rat Pack" is never hipper or funnier than in this, the ultimate Las Vegas movie -- quoted, copied and paid homage to in every movie since.

'Robin and the 7 Hoods' - In Chicago, the corrupt sheriff and Guy Gisborne, a south-side racketeer, knock off the boss Big Jim. Everyone falls in line behind Guy except Robbo, who controls the north side.

You can find the latest specs for 'The Frank Sinatra Collection' linked from our Blu-ray Release Schedule, where it's indexed under May 5. 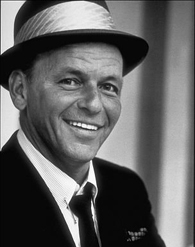