The western is riding out for vengeance on Blu-ray in July.

In an early announcement to retailers, Warner Archive is preparing 'The Deadly Trackers' for Blu-ray on July 26.

Sheriff Kilpatrick makes sure his town lives by the rule of the law. "We must not allow guns to do our thinking for us," he decrees. But even a man as determined as Kilpatrick has his limits. When marauding outlaws kill his wife and his son, he invokes a new rule: the rule of the gun.Richard Harris (A Man Called Horse, Unforgiven) portrays Kilpatrick, a deadly tracker seeking revenge. Kilpatrick is single-minded, unsparing, bullet-hard. Although his badge gives him no jurisdiction in Mexico, he still carries his pursuit across the border. Rod Taylor (Inglourious Basterds) plays Brand, a killer among killers, the murderous gang's leader. The bad-guy role is a departure for Taylor, and he makes the most of it with gusto. His slaughter of the English language is exceeded only by the human slaughter he leaves in his wake.The Deadly Trackers bears the explosive imprint of two action-movie specialists: director Barry Shear (Wild in the Streets, Across 110th Street) and screenwriter Lukas Heller (The Dirty Dozen, The Flight of the Phoenix). In their hands it becomes a heart-pounding adventure of justice at any cost. Where the law ends, The Deadly Trackers begins.

The Blu-ray will feature 1080p video, a DTS-HD MA 2.0 soundtrack, and supplements will include the Theatrical Trailer.

You can find the latest specs for 'The Deadly Trackers' linked from our Blu-ray Release Schedule, where it's indexed under July 26. 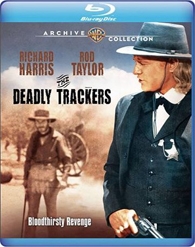 Discs mentioned in this article: (Click for specs and reviews)
The Deadly Trackers (Blu-ray)