The patriotic puppets will save the day on Blu-ray in October. You can pre-order the disc here.

In an early announcement to retailers, Warner Bros. is preparing 'Team America: World Police' for Blu-ray on October 13.

Popular Broadway actor Gary Johnston is recruited by the elite counter-terrorism organization Team America: World Police. As the world begins to crumble around him, he must battle with terrorists, celebrities and falling in love.

Specs have not been detailed yet, but supplements will include: Team America: An Introduction; Building the World; Crafting the Puppets; Pulling the Strings; Capturing the Action; Miniature Pyrotechnics; Up Close with Kim Jong-Il; Dressing Room Test; Puppet Test; Deleted/Extended Scenes and Outtakes; Animated Storyboards; and 2 Theatrical Trailers.

You can find the latest specs for 'Team America: World Police' linked from our Blu-ray Release Schedule, where it's indexed under October 13. 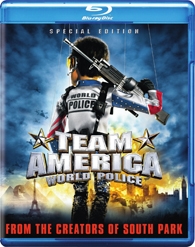