Russell Crowe's 'The Water Diviner' Blu-ray Up for Pre-Order

The epic drama will journey to Blu-ray in July, and you can pre-order the film here.

In an early announcement to retailers, Warner Bros. is preparing 'The Water Diviner' for Blu-ray on July 28.

Russell Crowe's directorial debut, The Water Diviner, is an epic adventure set four years after the devastating battle of Gallipoli during World War I. Australian farmer Joshua Connor (Russell Crowe) travels to Turkey in 1919 to discover the fate of his three sons, reported missing in action. Initially blocked by military bureaucracy, his determination unwavering, he is helped first by the beautiful Ayshe (Olga Kurylenko) who owns the hotel in which he stays in Istanbul and then by Turkish Officer Major Hasan, who had fought against Connor’s sons. Holding on to hope, Connor and Major Hasan must travel across the war-torn landscape to find the truth, and for Joshua to find his own peace.

Specs have not bee detailed yet, but supplements will include The Making of The Water Diviner.

Suggested list price for the Blu-ray/Digital HD combo pack is $44.95.

You can find the latest specs for 'The Water Diviner' linked from our Blu-ray Release Schedule, where it's indexed under July 28. 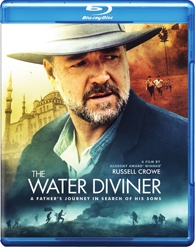 Discs mentioned in this article: (Click for specs and reviews)
The Water Diviner (Blu-ray)