Rick and Mory will get schwifty on Blu-ray in June.

In an early announcement to retailers, Warner Bros. is preparing 'Rick and Morty: The Complete Second Season' for Blu-ray on June 7.

Rick Sanchez (Justin Roiland) is still living with his daughter Beth's (Sarah Chalke) family and causing more trouble than ever. This season the rest of the family, his son-in-law Jerry (Chris Parnell), grand-daughter Summer (Spencer Grammer) and grand-son Morty (Justin Roiland) are dragged into Rick's intergalactic adventures, as he faces new threats and mysteries of his secret past are revealed. Can the family survive Rick's insanity and all the chaos the universe throws at them?

Suggested list price for the Blu-ray/Digital HD combo pack is $29.98.

You can find the latest specs for 'Rick and Morty: The Complete Second Season' linked from our Blu-ray Release Schedule, where it's indexed under June 7. 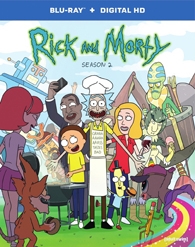 Discs mentioned in this article: (Click for specs and reviews)
Rick and Morty: The Complete Second Season (Blu-ray)