The 1985 film will be receiving the Blu-ray treatment in May. Pre-orders are now live.

In an early announcement to retailers, Warner Archive says 'Ladyhawke' will hit Blu-ray on May 5.

On the run from the dungeons of the medieval city of Aquila, thief Phillipe Gaston is helped by Etienne Navarre (Rutger Hauer), a mysterious knight who carries a precious hawk on his arm and is also pursued by the soldiers of Aquila. Two years ago, Navarre and his lover Lady Isabeau were banished from the city and placed under a spell which turns him into a wolf by night and her into a hawk by day, leaving them only a few brief moments to spend together at dawn and sunset. Now, Navarre tries to persuade Phillipe to help him and Isabeau re-enter the city and confront the evil Bishop who, out of his lust for Isabeau, cast the jealous spell which keeps the two lovers apart. Phillipe agrees, but the path to the Bishop is a heavily guarded one, and it will take great courage to follow this mission through to the end.

The Blu-ray will feature 1080p video, a lossless 5.1 soundtrack, and supplements include the original theatrical trailer.

You can find the latest specs for 'Ladyhawke' linked from our Blu-ray Release Schedule, where it is indexed under May 5. 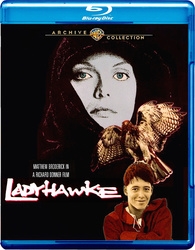 Discs mentioned in this article: (Click for specs and reviews)
Ladyhawke (Blu-ray)