The fourth season of the CBS series will hit Blu-ray in August, and you can pre-order the show here.

In an early announcement to retailers, Warner Bros. is preparing 'Person of Interest: The Complete Fourth Season' for Blu-ray on August 11.

The Blu-ray/Digital HD combo pack will feature 1080p video, a DTS-HD MA 5.1 soundtrack, and supplements will include: Music of Interest; Going Underground with Root and Finch; Person of Interest 2014 Comic-Con Panel; and Gag Reel.

You can find the latest specs for 'Person of Interest: The Complete Fourth Season' linked from our Blu-ray Release Schedule, where it's indexed under August 11. 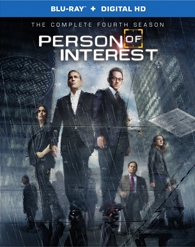 Discs mentioned in this article: (Click for specs and reviews)
Person of Interest: The Complete Fourth Season (Blu-ray)