Batman, Superman, and Wonder Woman will join forces on Blu-ray in July. You can pre-order the disc here.

In an early announcement to retailers, Warner Bros. is preparing 'Justice League: Gods & Monsters' for Blu-ray on July 28.

Journey to a divergent reality where the Justice League protects the planet — but answers to no one but themselves. Employing methods of intimidation and fear, this Superman, Batman and Wonder Woman deal brute force in the name of justice. In this alternate universe, Superman was not raised by the Kents in Smallville, the Caped Crusader is not Bruce Wayne, and Wonder Woman is not an Amazon warrior of Themyscira. When a group of famed scientists experience untimely “accidents,” a government task force follows the trail of clues to the Justice League -- but is there a more powerful player operating from the shadows? It’s a high stakes game of intrigue, mystery and action that asks the question: How do you serve justice to those above the law?

Supplements have not been detailed yet, but the Blu-ray/DVD/Digital HD combo pack will feature 1080p video and a DTS-HD MA 5.1 soundtrack.

You can find the latest specs for 'Justice League: Gods & Monsters' linked from our Blu-ray Release Schedule, where it's indexed under July 28. 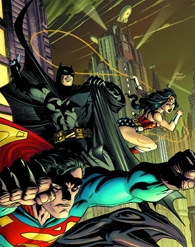