The Clown Prince of Crime is heading to 4K Blu-ray and Blu-ray.

Warner Bros. is prepping Joker for 4K Ultra HD Blu-ray and Blu-ray. An exact release date has not been announced yet, but pre-orders are now live via Amazon.

Director Todd Phillips' Joker centers around the iconic arch nemesis and is an original, standalone fictional story not seen before on the big screen. Phillips’ exploration of Arthur Fleck, who is indelibly portrayed by Joaquin Phoenix, is of a man struggling to find his way in Gotham's fractured society. A clown-for-hire by day, he aspires to be a stand-up comic at night…but finds the joke always seems to be on him. Caught in a cyclical existence between apathy and cruelty, Arthur makes one bad decision that brings about a chain reaction of escalating events in this gritty character study.

You can find the latest specs for Joker linked from our Blu-ray and 4K Release Schedules, where it is indexed under PENDING. 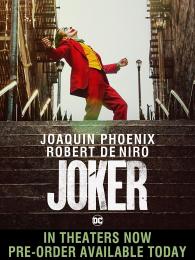