In an early announcement to retailers, Warner Bros. is preparing 'Jackie Chan's First Strike' & 'Rumble in the Bronx' for Blu-ray on October 6.

'Rumble in the Bronx' - Jackie Chan ("Rush Hour" franchise, "Shanghai Noon") stars as Ah Keung, a cop from Hong Kong who comes to New York City to attend his uncle's wedding. He plans a little relaxation, a little sightseeing and little work at the family grocery store. Somebody forgot to tell Ah that the grocery store sits in the middle of the South Bronx, America's toughest hood and ground-zero of a crime war. Now, caught between the mob and a ruthless motorcycle gang, Ah shows--after inflicting much pain on gangsters all around--that this seemingly average guy is a world-class daredevil and martial arts master. Anita Mui ("The Legend of Drunken Master," "Ji ji") also stars as Elaine. 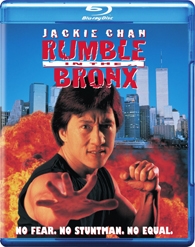 'Jackie Chan's First Strike' - The world's most explosive action star fights for America for the first time. A hard-hitting gang has the numbers and weapons on its side. Jackie Chan (RUSH HOUR) has what's within his reach: a ladder. It will do. Chan's amazingly inventive and widely famed deployment of a ladder as a weapon (he also uses a broom, stilts, a chair, a shark [!] and anything else that's handy during the film) is a highlight among highlights in this rollicking action/comedy in which he's called upon to recover a stolen warhead component. The adventure whisks our hero from high-rise Hong Kong to the snowy Ukraine to sunny Brisbane – and he plunges into it all with wall-to-wall kickbutt joy. Settle in and watch as Chan and a ladder lift the martial arts to new heights of fun. 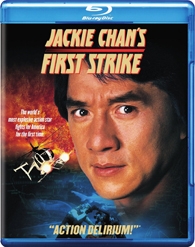 You can find the latest specs for 'Jackie Chan's First Strike' & 'Rumble in the Bronx' linked from our Blu-ray Release Schedule, where they're indexed under October 6.

Discs mentioned in this article: (Click for specs and reviews)
Jackie Chan's First Strike (Blu-ray)
Rumble in the Bronx (Blu-ray)