The animated film is coming to Blu-ray in April.

In an early announcement to retailers, Warner Bros. is preparing 'Justice League vs Teen Titans' for Blu-ray on April 12. A separate Deluxe Edition (w/Figure) will also be released that same day.

Soon after Damian joins the Teen Titans as Robin, a rift develops between the Justice League and the Titans over Raven, whom the JL sees as being in league with her father, the demon Trigon, while the Titans see her as his victim. Soon the rift turns into an all-o ut war, as the Titans take it upon themselves to protect Raven from the League, while thwarting Trigon's plans to create a hell on Earth.

You can find the latest specs for 'Justice League vs Teen Titans' linked from our Blu-ray Release Schedule, where it's indexed under April 12. 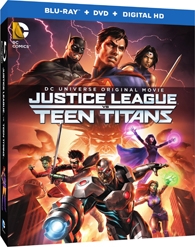 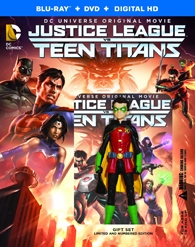