The crime drama will arrive on Blu-ray in February.

In an early announcement to retailers, Warner Bros. is preparing 'Black Mass' for Blu-ray on February 16.

In 1970s South Boston, FBI Agent John Connolly persuades Irish mobster James “Whitey” Bulger to collaborate with the FBI in order to eliminate a common enemy: the Italian mob. The drama tells the story of this unholy alliance, which spiraled out of control, allowing Whitey to evade law enforcement, consolidate power and become one of the most ruthless and dangerous gangsters in Boston history.

Specs have not been detailed yet, but supplements will include: Johnny Depp: Becoming Whitey Bulger; The Manhunt for Whitey Bulger; and Black Mass: Deepest Cover, Darkest Crime.

Suggested list price for the Blu-ray/DVD/Digital HD combo pack is $44.95.

You can find the latest specs for 'Black Mass' linked from our Blu-ray Release Schedule, where it's indexed under February 16. 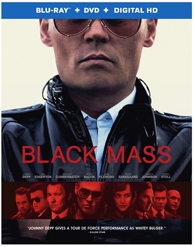 Discs mentioned in this article: (Click for specs and reviews)
Black Mass (Blu-ray)