'BarberShop: The Next Cut' Starring Ice Cube Dated for Blu-ray

The latest film in the 'BaberShop' franchise will arrive on Blu-ray in July.

In an early announcement to retailers, Warner Bros. is preparing 'BarberShop: The Next Cut' for Blu-ray on July 26.

It's been more than 10 years since our last appointment at Calvin's Barbershop. Calvin and his longtime crew, including Eddie, are still there, but the shop has undergone some major changes. Most noticeably, our once male-dominated sanctuary is now co-ed. The ladies bring their own flavor, drama and gossip to the shop challenging the fellas at every turn. Despite the good times and camaraderie within the shop, the surrounding community has taken a turn for the worse, forcing Calvin and our crew to come together to not only save the shop, but their neighborhood.

Specs have not been detailed yet, but supplements will include: Gag Reel; The Next Cut: Barbershop Bootcamp; and Deleted Scenes with Malcolm D. Lee.

You can find the latest specs for 'BarberShop: The Next Cut' linked from our Blu-ray Release Schedule, where it's indexed under July 26. 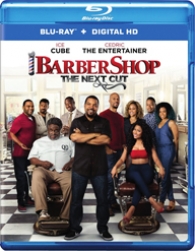 Discs mentioned in this article: (Click for specs and reviews)
BarberShop: The Next Cut (Blu-ray)