The South African musicians will serenade Blu-ray in March, and you can pre-order the disc now.

In an early announcement to retailers, Warner Bros. is preparing 'Bala Brothers' for Blu-ray on March 24.

These three extraordinary brothers from South Africa - Loyiso, Zwai and Phelo - combine operatic voices, rich harmonies, R&B energy and traditional South African melodies and rhythms into something entirely unique. They broke the color barrier of the famous Drakensberg Boys' Choir during the depths of Apartheid, they headlined at the Cape Town Stadium tribute to Nelson Mandela in 2013, and here they perform an inspiring live program of music ranging from the Lion King to Paul Simon, in their hometown Johannesburg's beautiful Lyric Theatre.  As a tribute to the late South African President Mandela, the Bala Brothers perform the Labi Siffre classic, "Something Inside So Strong" a moving moment in the program made all the more poignant by the presence of Winnie Mandela in the audience.

You can find the latest specs for 'Bala Brothers' linked from our Blu-ray Release Schedule, where it's indexed under March 24. 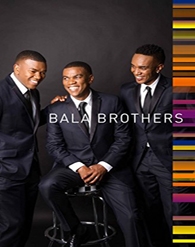 Discs mentioned in this article: (Click for specs and reviews)
Bala Brothers (Blu-ray)