In an early announcement to retailers, Warner Archive is preparing 'Bells Are Ringing' for Blu-ray on January 31.

The get-up in New York's get-up-and-go comes from the switchboard operators of Susanswerphone. Need a wakeup call? Your appointments? Encouragement from "Mom"? A racetrack bet? It all comes from that dutiful nerve – or noive – center that keeps enterprises enterprising and, maybe, wedding bells ringing. Judy Holliday reprises her Tony-winning Broadway role of irrepressible switchboard girl Ella in a jubilant adaptation that marked her final movie and the final teaming of movie-musical titans Arthur Freed and Vincente Minnelli. Dean Martin costars as a struggling playwright in for a surprise when he learns "Mom's" identity. The sparkling Jule Styne/Betty Comden/ Adolph Green score includes Holliday's heartfelt "The Party's Over" and the jolly Holliday/Martin duet "Just in Time." You've dialed the right number, musical fans!

Specs have yet to be revealed, but supplements include: Featurette - Bells are Ringing: Just in Time; Outtake Musical Numbers; Alternate Take: The Midas Touch - Hal Linden & Chorus; and Original Theatrical Trailer.

You can find the latest specs for 'Bells Are Ringing' linked from our Blu-ray Release Schedule, where it is indexed under January 31. 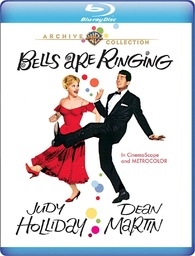