In an early announcement to retailers, Warner Archive is preparing 'Pete Kelly's Blues' for Blu-ray sometime in 2014.

Jack Webb stars as a Kansas City jazz cornetist, and when he takes on a vicious ganglord (Edmond O'Brien), the only thing faster than his famed deadpan delivery is the rapid-fire action. And the only thing more dynamic than film's Dixieland - and blues-infused musical sore is its stellar cast. Janet Leigh is a gin-swilling heiress who moves in on Kelly's heart. Lee Marvin and Martin Milner as Pete's hot-headed sidemen keep the tempo torrid. Andy Devine goes dramatic as an ice-cold cop. Ella Fitzgerald brings her inimitable jazz alchemy to "Hard Hearted Hannah" and "Pete Kelly's Blues". And Peggy Lee proves as masterful acting the blues as singing them, earning a Best Supporting Actress Academy Award nomination for her portrayal of a boozy songbird.

You can find the latest specs for 'Pete Kelly's Blues' linked from our Blu-ray Release Schedule, where it's indexed under PENDING. 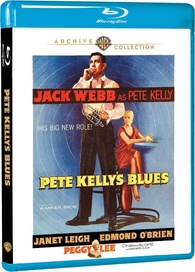