'The Picture of Dorian Gray' Heads to Blu-ray

The 1945 Oscar and Golden Globe-winning classic will be getting the high-definition treatment later this year. Pre-order your copy here.

In an early announcement to retailers, Warner Archive is working on 'The Picture of Dorian Gray' for Blu-ray sometime later this year.

Perfection on the outside. Murderous corruption within. Years change. Handsome Dorian Gray does not. He remains youthful-looking. But a portrait of him tells another story. It changes with the years, revealing the horrific effects of Gray's life of debauchery and evil.

From Oscar Wilde's novel and filmed in a rapturous, deep-focus style that earned a Best Cinematography Academy Award, this chilling tale remains unchanging in its power and entertain. Hurd Hatfield plays the rakish title character in this morality tale, also featuring George Sanders as a Wilde-like dandy who leads Gray to perdition. Best Supporting Actress Oscar nominee Angela Lansbury as a music-hall thrush victimized by Gray, plus Donna Reed and Peter Lawford. Every picture tells a story. But none tells as haunting a tale of terror as The Picture of Dorian Gray.

You can find the latest specs for 'The Picture of Dorian Gray' linked from our Blu-ray Release Schedule, where it's indexed under PENDING. 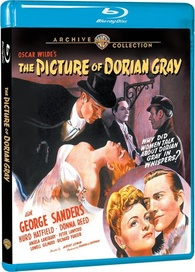