In an early announcement to retailers, Warner Archive is working on 'Wolfen' for a Blu-ray release later this year.

A real-estate tycoon, his coke-bringing wife and a slum wino have something grisly in common: they're the latest victims in a series of random murders. A veteran NYPD detective soon suspects the killings may be supernatural and deliberate: ages-old beings of cunning intelligence and incredible power, defending their turf from the encroachments of humankind.

The Blu-ray will feature 1080p video, a lossless 5.1 soundtrack, and supplements will include the original theatrical trailer.

You can find the latest specs for 'Wolfen' linked from our Blu-ray Release Schedule, where it's indexed under PENDING. 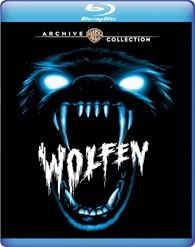