The 1975 action-comedy is headed for Blu-ray in November.

In an early announcement to retailers, Warner Archive is working on 'Doc Savage: The Man of Bronze' for Blu-ray on November 1.

Based on the first of Kenneth Robeson's 181 adventure-packed Doc Savage books, Doc Savage: The Man of Bronze hits the screen with all its gee-whiz, gung-ho spirit intact. And its bold protagonist, who along with having a Herculean body is also a surgeon, linguist and inventor, remains determined to do right to all and wrong to no one.

Ron Ely (TV's Tarzan) plays the strapping Savage in this high-camp, big- heroics tale of his trek into the Valley of the Vanished to confront the power-hungry Captain Seas (Paul Wexler). And behind the camera are pros who know how to get the most of this entertainment bronze mine: veteran fantasy film producer George Pal (The War of The Worlds, The Time Machine) and director Michael Anderson (Around the World in 80 Days, Logan's Run).

The Blu-ray will feature 1080p video, lossless 2.0 audio, and supplements include the original theatrical trailer.

You can find the latest specs for 'Doc Savage: The Man of Bronze' linked from our Blu-ray Release Schedule, where it is indexed under November 1. 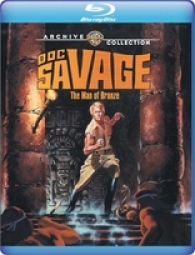