The 1954 film starring Dick Powell, Debbie Reynolds, and Anne Francis will arrive on Blu-ray in April.

In an early announcement to retailers, Warner Archive has revealed 'Susan Slept Here' will hit Blu-ray on April 19.

Screenwriter Mark Christopher gets a Christmas present that isn't on his Santa list: a 17-year-old delinquent named Susan, deposited in his bachelor pad by a cop pal who doesn't want to see the kid spend Christmas behind bars. Touched by Susan's plight, Mark decides there's only one way to keep her out of juvie: marry her in name only and get an annulment when she comes of age. But after a Vegas elopement, Susan isn't so sure she wants to be the ex-Mrs. Christopher. Dick Powell (in his last film role before devoting himself to a hugely successful TV career) and Debbie Reynolds play the (maybe) mismatched couple in a big-hearted romantic comedy from animator-turned-director Frank Tashlin that makes merry use of its Yuletide setting.

You can find the latest specs for 'Susan Slept Here' linked from our Blu-ray Release Schedule, where it is indexed under April 19. 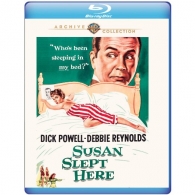