The 1956 crime thriller starring Henry Fonda will be released on Blu-ray next month.

In an early announcement to retailers, Warner Archive says 'The Wrong Man' will be available on Blu-ray on January 26.

The Wrong Man is like and unlike any other Alfred Hitchcock movie. The story packs tension, the images are spellbinding and the dilemma genuinely frightening. But this time the master of suspense dramatizes the harrowing true experiences of a man tried for crimes committed by a lookalike robber.

Henry Fonda plays musician Manny Balestrero, a man full of visible but unspoken rage at his wrongful arrest. Vera Miles is his distraught wife Rose, driven to madness by the ordeal. And the right man to bring the unsettling facts of the case to vivid screen life with documentary precision is Hitchcock. He made New York City a star of the film and cast real-life Balestrero case witnesses in small roles. He shot in many actual locations, among them the Stork Club, Manny's jail cell and Rose's sanitarium.

You can find the latest specs for 'The Wrong Man' linked from our Blu-ray Release Schedule, where it is indexed under January 26. 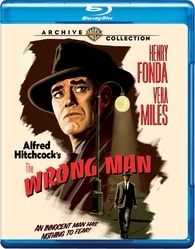