'The Lego Movie: The Special Special Edition' Now Available Only at Target

Everything is AWESOME! Get a new Blu-ray edition of the acclaimed animated feature only at Target stores.

Warner has released 'The Lego Movie: The Special Special Edition' on Blu-ray on November 3.

Directed by Phil Lord & Christopher Miller (“Cloudy with a Chance of Meatballs,” “21 Jump Street”), “The LEGO Movie” is the hilarious story of a nobody who saves everybody. “The Special Special Edition” features a bonus Blu-ray disc with over two hours of new special features. Fans also can own all the new bonus features digitally on iTunes Extras and Vudu Extras, available now.

The LEGO Movie stars Chris Pratt as the voice of Emmet, an ordinary LEGO minifigure, mistakenly thought to be the extraordinary MasterBuilder, and Will Ferrell as the voice of President Business, aka Lord Business, an uptight CEO who has a hard time balancing world domination with micro-managing his own life. Voicing the members of Emmet's rebel crew on this heroic mission are Morgan Freeman ("Oblivion") as the ancient mystic Vitruvius; Elizabeth Banks ("The Hunger Games") as tough-as-nails Wyldstyle, who mistakes Emmet for the savior of the world and guides him on his quest; Will Arnett (TV's "The Millers") as the mysterious Batman, a LEGO minifigure with whom Wyldstyle shares a history; Nick Offerman (TV's "Parks and Recreation") as the craggy, swaggering pirate Metal Beard, obsessed with revenge on Lord Business; Alison Brie (TV's "Community") as the sweet and loveable Unikitty and Charlie Day (TV's "It's Always Sunny in Philadelphia") as Benny, the 1980-something Spaceman.

The release includes all of the bonus content from the 2014 release plus: Commentary with Chris Miller, Phil Lord, Chris McKay and Film Crit HULK; The LEGO Movie In 90 Seconds; Wizard Team Go!; How It Should Have Ended - Alternate Ending; How It Should Have Ended - LEGO Super Cafe; Trapped In The Ice: A Short Film; Dream Job: Meet the Master Builders; Unlock the Secrets: The Insider's Guide to the LEGO Movie; and more!

You can find the latest specs for 'The Lego Movie: The Special Special Edition' linked from our Blu-ray Release Schedule, where it is indexed under November 3. 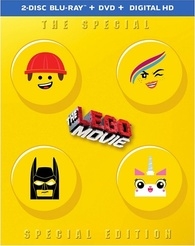