Thea Sharrock's 'Me Before You' Dated for Blu-ray

The drama starring Emilia Clarke and Sam Claflin is planned for Blu-ray in August.

In an early announcement to retailers, Warner Brothers will be releasing 'Me Before You' on Blu-ray on August 30.

When Louisa Clark—Lou, as she's known—unexpectedly loses her waitressing job she must scramble to replace the income that her tight-knit family depends upon. Desperation drives her to take a job as a caregiver to Will Traynor, a man who used to be a wealthy banker with an adventurous soul, living life to the very fullest, but for whom those days are in the past. After a tragic accident, Will lost the desire to live and now keeps everyone at a distance with his caustic, overbearing attitude. But unlike his family, Lou refuses to tiptoe around him or cater to his moods. In fact, her sparkling personality and easy nature are hard for even Will to ignore, and soon enough each becomes exactly what the other needs.

Specs have yet to be revealed, but supplements include: Me Before You: From Page to Screen; Outtakes; and Deleted Scenes.

You can find the latest specs for 'Me Before You' linked from our Blu-ray Release Schedule, where it is indexed under August 30. 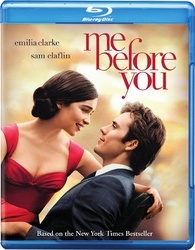