Both Leslie Nielson comedies will be available on Blu-ray this December.

In an early announcement to retailers, Warner Brothers will be releasing 'The Naked Gun 2½: The Smell of Fear' and 'The Naked Gun 33⅓: The Final Insult' on Blu-ray on December 1.

'The Naked Gun 2½: The Smell of Fear' - Lt. Frank Drebin (Leslie Nielsen) loves a mystery. Why are we here? Is there life after sex? Yes, Drebin tackles the big issues- and the biggest of all is how to stop devious Quentin Hapsburg's (Robert Goulet) plan to destroy the environment! Returning with Nielsen in this hilarious Naked Gun sequel are Priscilla Presley as Jane, the woman who can melt a cheese sandwich from 20 paces and George Kennedy as intrepid Capt. Ed Hocken. The gang's all here. And so are the laughs. Like Drebin, you're gonna love it!

'The Naked Gun 33⅓: The Final Insult' - Oscar® night. Who will win? Who will lose? And will someone please kick that numbskull off stage? Wait! That's no ordinary numbskull. That's Lt. Frank Drebin, crashing the ceremonies to stop a terrorist plot that could mean curtains for him –or will a simple window shade be enough? Yes, back for a hilarious threepeat and a state-of-the-art advance in sequel numbering are the filmmakers you love, the returning stars you adore, plus others getting Naked for the first time: Fred Ward, Anna Nicole Smith and more folks you'd happily give your seat to on a crowded bus. The fun begins when… oops, we don't want to give away the gags. No, you'll have to pay for them. You'll be glad you did!

Specs and supplements haven't been revealed yet, but the suggested list price for each Blu-ray is $14.98.

You can find the latest specs for 'The Naked Gun 2½: The Smell of Fear' and 'The Naked Gun 33⅓: The Final Insult' linked from our Blu-ray Release Schedule, where they are indexed under December 1. 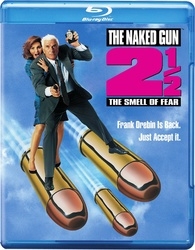 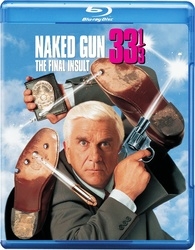