The CW's 'The Originals: The Complete Second Season' Announced for Blu-ray

The second season of the fantasy series will sink its fangs into Blu-ray in September.

In an early announcement to retailers, Warner Brothers is preparing 'The Originals: The Complete Second Season' for Blu-ray on September 1.

As Original vampire-werewolf hybrid Klaus Mikaelson returned to the vibrant, supernaturally charged city of New Orleans in season one, he was stunned to learn — along with his siblings Elijah and Rebekah — that Hayley, a werewolf, was pregnant with his child, and his vampire protégé, Marcel, whom the Original siblings had thought long dead, was ruling the French Quarter. Soon, a bloody war escalated between vampires and witches — the stakes raised by powerful teenage witch Davina and by Klaus’s bond with Cami, a student with a painful past — and a ruthless pack of wolves seized the opportunity to stage a violent coup. Now, in season two, a new status quo must be adjusted to, as the newly empowered werewolves control the city. Klaus struggles with weaknesses as Elijah desperately tries to save Hayley — now a hybrid — from a vicious spiral of self-destruction. Meanwhile, with the re-emergence of several Mikaelsons, “family is power” takes on new meaning.

The four-disc set will feature 1080p video, a lossless 5.1 soundtrack, and supplements include: 2014 Comic-Con panel, featurettes, behind the scenes, deleted scenes, and a gag reel.

You can find the latest specs for 'The Originals: The Complete Second Season' linked from our Blu-ray Release Schedule, where it is indexed under September 1. 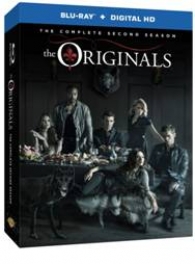