The next DCU original animated film is headed for Blu-ray in April.

In an early announcement to retailers, Warner Archive is working on 'Teen Titans: The Judas Contract' for Blu-ray on April 18.

Led by Starfire, the Teen Titans – Beast Boy, Raven, Blue Beetle, Robin and the just-returned Nightwing – have built a cohesive team in their never-ending battle against evil; but their newest teammate, the mysterious and powerful Terra, may be altering that dynamic. Meanwhile, an ancient evil, Brother Blood, has awakened, and familiar foe Deathstroke is lurking in the shadows – both waiting to pounce. Ultimately, the Teen Titans will need to battle their enemies and their own doubts to unite and overcome the malicious forces around them in this twisting tale of intrigue, adventure and deception.

The combo pack will feature 1080p video and supplements include: Batman and Harley Quinn – Sneak peek at the next DC Universe Original Movie, Batman and Harley Quinn, featuring the talented creators and voice cast; Titanic Minds: Wolfman and Perez – This revealing documentary explores a creative partnership that has lasted decades as Marv Wolfman and George Pérez come together to discuss their careers and one of the most famous runs in Teen Titan history, The Judas Contract; Villains United: Deathstroke – When the super-soldier Deathstroke appears, the forces of good will be in the fight of their lives. This short featurette reveals the origin and unique abilities of this villain; Additional Sneak Peeks; and From the DC Comics Vault - Two Bonus Cartoons.

You can find the latest specs for 'Teen Titans: The Judas Contract' linked from our Blu-ray Release Schedule, where it is indexed under April 18. 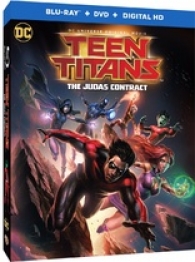