'Stephen King's It' Dated for Blu-ray

The 1990 TV miniseries is headed for Blu-ray this October.

In an early announcement to retailers, Warner Brothers is preparing 'Stephen King's It' for Blu-ray on October 4.

A malevolent force in a small New England town takes the shape of a clown, but he's not clowning around. Instead, he terrifies youngsters and brings some to their untimely doom - until some wily kids fight back. The evil resurfaces 30 years later: meaner, angrier, deadlier. And friends who vividly remember youthful terrors reunite to battle It. Based on the 1986 novel.

Specs and supplements haven't been revealed yet, but the Blu-ray/DVD combo pack will include a T-shirt and the suggested list price is $54.97.

You can find the latest specs for 'Stephen King's It' linked from our Blu-ray Release Schedule, where it is indexed under October 4. 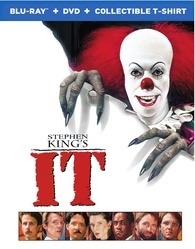