The 1996 animated comedy starring Michael Jordan is getting a Steelbook edition next month.

In an early announcement to retailers, Warner is working on 'Space Jam: 20th Anniversary Edition (Steelbook)' for Blu-ray on November 15.

The Nerdlucks, a gang of space creatures, have been dispatched by their boss to kidnap Bugs Bunny and his Looney Tunes cohorts. Bugs challenges the aliens to a basketball tournament: if the Looney Tunes win, they'll remain on Earth. Bugs knows he needs some serious help, but basketball's best players are all having their skills "absorbed" by the aliens. Of course, there's a baseball player he happens to know...

You can find the latest specs for 'Space Jam: 20th Anniversary Edition (Steelbook)' linked from our Blu-ray Release Schedule, where it is indexed under November 15. 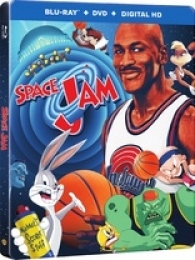