'Scooby-Doo! and WWE: Curse of the Speed Demon' Blu-ray Bound

The next animated Scooby mystery will wrestle its way to Blu-ray in August.

In an early announcement to retailers, Warner says 'Scooby-Doo! and WWE: Curse of the Speed Demon' is headed for Blu-ray on August 9.

It's pedal to the metal as Scooby-Doo, Shaggy and the gang team up with the superstars of WWE in this hi-octane, all-new original movie! When Scooby and Mystery Inc. visit an off-road racing competition, it's not long before strange events start to occur. A mysterious phantom racer, known only as Inferno, is causing chaos and determined to sabotage the race. It's up Scooby-Doo, Shaggy and their new driving partner, The Undertaker, to save the race and solve the mystery. Along with other WWE superstars such as Triple H, Paige and Shamus, it's time to start your engine and your appetite because Scooby-Doo and WWE are chasing down adventure and laughs just for you!

Specs have yet to be revealed, but the suggested list price for the Blu-ray is $24.98.

You can find the latest specs for 'Scooby-Doo! and WWE: Curse of the Speed Demon' linked from our Blu-ray Release Schedule, where it is indexed under August 9. 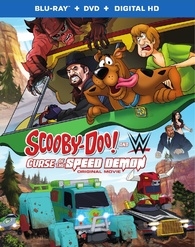