The British gangster drama is heading to Blu-ray in October. You can order the show here.

In an early announcement to retailers, Warner Bros. is preparing 'Peaky Blinders: The Complete First Season' for Blu-ray on October 20.

Named after their practice of sewing razor blades into the peaks of their caps, the notorious 'Peaky Blinders' gang is one of the city's most feared, with interests in illegal betting, protection and the black market. Former war hero and brains behind the operation Tommy Shelby (Cillian Murphy), however, is eager to safeguard his family's success by making the business legitimate. But when he's offered a consignment of stolen arms, Tommy's desire to increase the family's influence in the city brings him into direct conflict with Chief Inspector Campbell (Sam Neill), a brutally tough Belfast policeman who's been charged with recovering the guns at any cost.

The 2-disc Blu-ray set will feature 1080p video, lossless 5.1 audio, and supplements include a making-of featurette.

You can find the latest specs for 'Peaky Blinders: The Complete First Season' linked from our Blu-ray Release Schedule, where it's indexed under October 20. 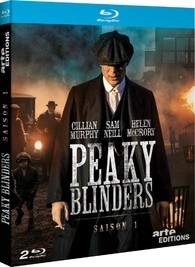