Mike Nichols' 'Who's Afraid of Virginia Woolf?' Dated and Detailed for Blu-ray

The 1966 film starring Elizabeth Taylor and Richard Burton will be getting a Blu-ray release in April.

In an early announcement to retailers, Warner Archive will be releasing 'Who's Afraid of Virginia Woolf?' on Blu-ray on April 12.

You can find the latest specs for 'Who's Afraid of Virginia Woolf?' linked from our Blu-ray Release Schedule, where it is indexed under April 12. 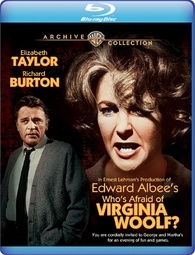