As previously reported, Warner Brothers will be releasing 'Mad Max: Fury Road' on Blu-ray and Blu-ray 3D, and now the date has been set yet for September 1.

An apocalyptic story set in the furthest reaches of our planet, in a stark desert landscape where humanity is broken, and most everyone is crazed fighting for the necessities of life. Within this world exist two rebels on the run who just might be able to restore order. There's Max (Tom Hardy), a man of action and a man of few words, who seeks peace of mind following the loss of his wife and child in the aftermath of the chaos. And Furiosa (Charlize Theron), a woman of action and a woman who believes her path to survival may be achieved if she can make it across the desert back to her childhood homeland.

Each release will feature 1080p video, Dolby Atmos and lossless 7.1 soundtracks, and supplements include: Maximum Fury: Filming Fury Road; Mad Max: Fury on Four Wheels; The Road Warriors: Max and Furiosa; The Tools of the Wasteland; The Five Wives: So Shiny, So Chrome; Fury Road: Crash & Smash; and Deleted Scenes.

You can find the latest specs for 'Mad Max: Fury Road' linked from our Blu-ray Release Schedule, where it is indexed under September 1. 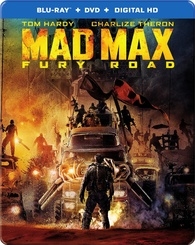 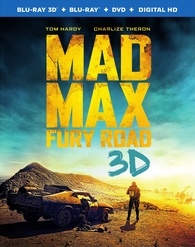