'Lights Out' Dated and Detailed for Blu-ray

The horror flick will come out of the shadows this October.

In an early announcement to retailers, Warner Brothers is working on 'Lights Out' for Blu-ray on October 25.

When Rebecca left home, she thought she left her childhood fears behind. Growing up, she was never really sure of what was and wasn't real when the lights went out…and now her little brother, Martin, is experiencing the same unexplained and terrifying events that had once tested her sanity and threatened her safety. A frightening entity with a mysterious attachment to their mother, Sophie, has reemerged. But this time, as Rebecca gets closer to unlocking the truth, there is no denying that all their lives are in danger…once the lights go out.

Specs have yet to be revealed, but the release will include deleted scenes.

You can find the latest specs for 'Lights Out' linked from our Blu-ray Release Schedule, where it is indexed under October 25. 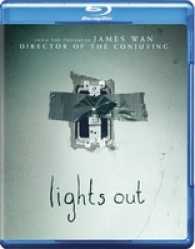