Friendships are tested when mega popstar, Livi, comes to Heartlake City on Blu-ray this February.

In an early announcement to retailers, Warner Brothers will be releasing 'LEGO Friends: Girlz 4 Life' on Blu-ray on February 2.

Our friends must devise and execute a plan—and fast—when popstar Livi’s manager steals the girls’ hit song: Girlz. As Livi gains more fame and recognition from the new hit single, the girls try to share the truth behind the song in hopes that Livi will do the right thing. As the friends set their plan into motion, they come to realize that fame doesn’t mean everything and friendship is the most precious thing in the world! Join Olivia, Stephanie, Emma, Mia and Andrea as they learn one of life’s most important lessons while having fun along the way.

Warner Bros. Home Entertainment is thrilled to team up with The LEGO® Group once again to release LEGO® Friends: Girlz 4 Life on Blu-rayTM , DVD and Digital HD,” said Mary Ellen Thomas, Warner Bros. Home Entertainment Vice President, Family & Animation Marketing. “Fans of the LEGO® Friends television program and line of construction toys will feel right at home in Heartlake City with the always confident and fun group of girlfriends in this new film.”

You can find the latest specs for 'LEGO Friends: Girlz 4 Life' linked from our Blu-ray Release Schedule, where it is indexed under February 2. 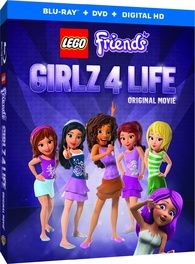