The all-new LEGO film will hit Blu-ray in March.

Can Batman prevail against an unstoppable intergalactic machine with the power to bend time itself!? Until now, the Justice League has triumphed over every foe who has challenged them. But all of those enemies had one thing in common: the were alive! This time, they face Brainiac a super-intelligent invulnerable machine whose mad quest endangers all life in the galaxy! With the fate of the Earth and the Justice League at stake, can the World's Greatest Detective outsmart the most evil supercomputer in the galaxy?

Specs and supplements haven't been revealed yet, but the release will include a Cosmic Boy mini figure.

You can find the latest specs for 'LEGO DC Comics Super Heroes: Justice League - Cosmic Clash' linked from our Blu-ray Release Schedule, where it is indexed under March 1. 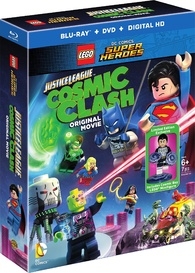