In an early announcement to retailers, Warner Brothers has revealed 'Midnight Special' will hit Blu-ray on June 21.

Writer/director Jeff Nichols proves again that he is one of the most compelling storytellers of our time with the sci-fi thriller “Midnight Special.” A provocative, genre-defying film as supernatural as it is intimately human, “Midnight Special” follows a father, Roy (Michael Shannon), who goes on the run to protect his young son, Alton (Jaeden Lieberher), a boy with mysterious powers that even Roy himself cannot comprehend.

What starts as a race from religious extremists and local law enforcement quickly escalates to a nationwide manhunt involving the highest levels of the Federal Government. Risking everything, Roy is committed to helping Alton reach his ultimate purpose, whatever that might be and whatever it costs, in a story that takes audiences on a perilous journey from Texas to the Florida coast, while exploring the bonds of love and trust, and the nature of faith.

Specs have yet to be revealed, but supplements include Origins featurettes and The Unseen World.

You can find the latest specs for 'Midnight Special' linked from our Blu-ray Release Schedule, where it is indexed under June 21. 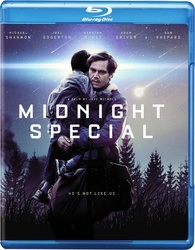