The horror sequel is bound for Blu-ray in September.

In an early announcement to retailers, Warner Brothers is preparing 'The Conjuring 2' for Blu-ray on September 13.

The supernatural thriller brings to the screen another real case from the files of renowned demonologists Ed and Lorraine Warren. Reprising their roles, Oscar nominee Vera Farmiga and Patrick Wilson star as Lorraine and Ed Warren, who, in one of their most terrifying paranormal investigations, travel to north London to help a single mother raising four children alone in a house plagued by malicious spirits.

Specs have yet to be revealed, but supplements include: The Enfield Poltergeist: Living The Horror; The Conjuring 2: Hollywood's Haunted Stage; Creating Crooked; Crafting The Conjuring 2; Sounds of Scary; and Deleted Scenes.

You can find the latest specs for 'The Conjuring 2' linked from our Blu-ray Release Schedule, where it is indexed under September 13. 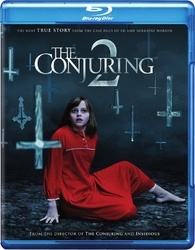