It's in the Bag: 'Blindspot: The Complete First Season' Headed for Blu-ray

The first season of the mysterious series arrives on Blu-ray in August.

In an early announcement to retailers, Warner will be releasing 'Blindspot: The Complete First Season' on Blu-ray on August 2.

Blindspot tells the story of a beautiful woman (Jaimie Alexander, Thor: The Dark World, Agents of S.H.I.E.L.D.), who is found naked in Times Square, with her body completely covered in cryptic, intricate tattoos. With no memories of her past, and clueless about her own identity this Jane Doe ignites the attention of the FBI, when it's discovered that one of her mysterious tattoos bears the name of FBI agent Kurt Weller (Sullivan Stapleton, Strike Back, 300: Rise of an Empire). As Weller and his teammates at the FBI begin to investigate the mysterious map of Jane Doe's strange tattoos, they are drawn into a high-stakes underworld that twists and turns through a labyrinth of secrets and revelations. The information they uncover, might ultimately change the world.

Specs haven't been revealed yet, but supplements include: Behind The Scenes Featurettes, 19 Deleted Scenes, 2015 Comic Con Panel, Bound and Gag Reel, and "Pilot" Audio Commentary.

You can find the latest specs for 'Blindspot: The Complete First Season' linked from our Blu-ray Release Schedule, where it is indexed under August 2. 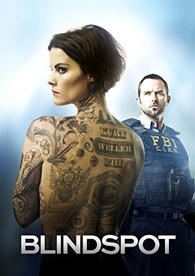